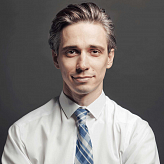 Andrei also lectures at the Chamber of Tax Advisers on tax law for corporates and on legal regulation in commercial sector.